The heart of Food Ministry is to reach out to the community through the food. It is something to gather together
around and share. As Jesus himself sat down with people and shared food in many occasions while talking about Father, he didn’t only teach them about God, but also fed them with food. Therefore, we want to do the same. It is amazing to have fellowship with different people building strong relationships with them in Christ through the love of God and yummy Indian food. We are reaching out to people who feel lonely and those in need of quality time. Listening to their stories and encouraging them, having one to one and sharing what God has done in our lives. We bring love to the people of Derby by reaching out physically and spiritually, face to face and heart to heart.

Food is something everybody likes and it plays a major role in the city of Derby.

We believe that the different Open Houses bring Kingdom aroma and flavours. It also helps to build strong friendly relationship with the people. So far we have done six different open houses and there are more to come.

We love going to a local coffee shop in the city centre where we meet different people chatting with them, creating friendships and opportunities to share the word.

Another ministry we do in city centre is the ‘Candy ministry’ which is nothing but a candy with a scripture. This is a great way to share God’s word with everyone no matter who they are and what background they have. 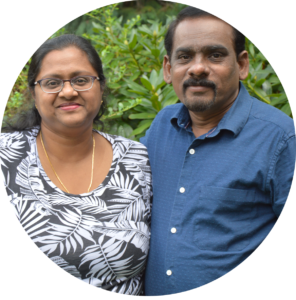 James and Mary are from India they joined YWAM Derby in 2018. James did his DTS in 1993 in India. He has done many different schools with YWAM since then. Mary, wife of James is also from India. She did her DTS in 2014 in YWAM Champagne, France. James and Mary are blessed with two children, Joel and Caroline.
Together, they reached out to different people groups in India. In 2014, they served with YWAM Champagne, France for four years pioneering Food and Fellowship Ministry, English classes, Evangelism. Later they moved to YWAM Derby as a family serving the city through different ministries.

We use cookies to ensure that we give you the best experience on our website. If you continue to use this site we will assume that you are happy with it.OkPrivacy Notice